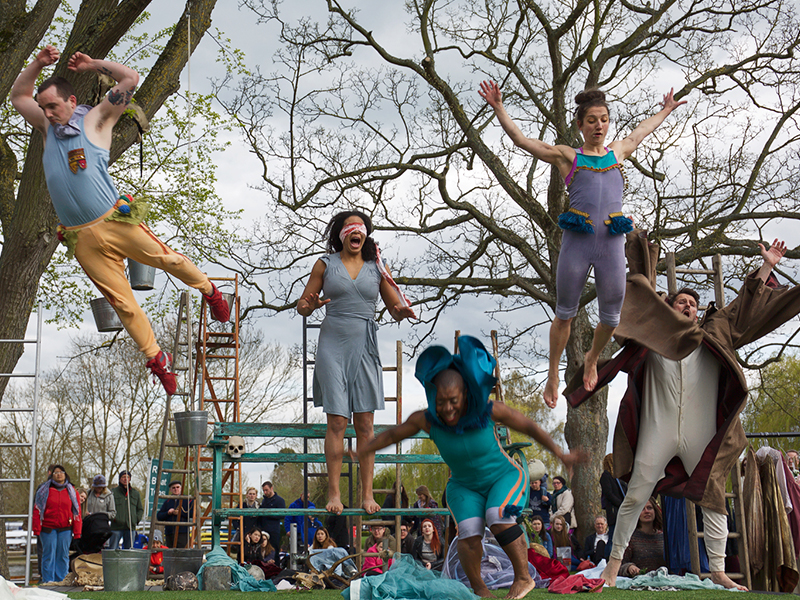 What is circus? I don’t have an answer and I really don’t care. But many people do, bending themselves into shapes a contortionist would envy to try and define this vibrant, richly diverse, fabulously eccentric art. The questions come as fast as the blades from the knife thrower. Does circus have to include a physical element? Is a sense of risk necessary? Is contemporary circus really circus or just performance without the hand flourishes? Does circus have to have a narrative? Or is circus only circus if it has no narrative at all? Where does dance end and circus begin? What is the difference between mime and circus? Can it be circus if there’s a script? If it’s outdoors? If it’s in a theatre? If it’s…

My answer is ‘Yes’ to all of the above. Because circus is not any kind of particular performance in a certain sort of place, or a story (or lack of story), or a selection of astounding physical feats. It’s a British cultural trait. Circus is so pervasive in our culture that it decorates our childhood. We’re all brought up on circus, even if we’ve never been to one. A child can instantly recognize the ringmaster’s red jacket on their bed sheets. A primary school pupil will read books about running away to a circus, or running away from one. Its imagery is part of who we are. Every ten year old knows what a big top is.

Since these beginnings, circus has crossed continents and classes. It travelled to and now flourishes in Europe, America and Australia; it’s a symbol of hope and resistance in Palestine and Afghanistan. Circus, originally middle class entertainment, now attracts such diverse audiences from such different backgrounds that other art forms should be looking to it for clues to their next Art Council application. Like the colourful circus posters boast, it’s for all ages and all classes. There’s no need for an essay in the programme to help you understand it. Great circus has the power to make sense to and enthrall all who watch it.

Circus has one root, but is now expressed in many different forms. There’s classical tented circus and contemporary circus that can happen anywhere. But it’s wrong to divide these two circus traditions just as its wrong to dictate what counts as circus. Circus refuses to be divided or pigeon-holed. It’s not a particular sort of performance. It’s so much more than that. It’s part of who we are.

In 2018, circus will be celebrating 250 years since Astley drew out the very first ring. Rather than seek to narrowly define circus, we should celebrate that such a fabulously diverse and accessible art form was born right here in Britain. It’s the tolerant, welcoming cultural trait at our heart. The party will be enormous. All are invited.

Dea Birkett is ringmaster of Circus250 www.circus250.org – the co-ordinating body for celebrating 250 years of circus in 2018 @circus250