Bench at Greenwich and Docklands International Festival this weekend

19 Jun Bench at Greenwich and Docklands International Festival this weekend

Mimbre’s new performance Bench, coming to Greenwich and Docklands International Festival in London as part of Greenwich Fair this weekend the 21-22 June and Tuesday the 24th of June at Dancing City. Here Lina Johansson – joint Artistic Director for Mimbre, share a little window into the process of creating Bench.

An annoying bug in our system prevents us from uploading new images onto our blog – so to see the Bench show in place in it’s outdoor setting you really have to come down this weekend! In the meanwhile below are some of the rehearsal images to enjoy. Exact performance times and locations are listed here: http://www.festival.org/whatson/110/bench-21–22

The idea for Bench started like a small simple idea – a set made as a park bench – allowing us to plant the show in the reality of where it is performed; in a park, a street or a square and use the theatre of our public spaces to inspire us for a series of sketches.

I knew I wanted it to reflect on the way we are among other people, and the way other people view you when in public. What assumptions do you make if you see a woman sitting on a bench on her own – do you assume she is waiting for someone? Do you think she is lonely? Who do we meet if we allow ourselves to be friendly to strangers? What do you see if you allow yourself to sit down on a bench and watch the spectacle of the street playing out in front of you?

Working with physical choreographies and using a devising process means that you don’t know from the start exactly which story it is that will carry through and have a resonance with an audience. The beauty is that stories starts to emerge that I didn’t even know myself that I wanted to tell.

, dreamy fantasies and some very silly characters bringing some laughter and lightness.

The acrobatic training is as of course always a big part of Mimbre’s rehearsals, with an hour long warm-up and strengthening session each morning and time for practising the acrobatics tricks both in the rehearsals and in the weeks in-between rehearsals; to find new tricks and to keep existing ones safe. For Bench our acrobatics coach Adrian Porter and my joint Artistic Director Silvia Fratelli trained up our 2 new Mimbre members; Alcina Mendes and Rebecka Nord. Finding trust, safety and confidence with the new tricks is time-consuming but is part of the physical language we use for our shows and I am as always enjoying the exploration of the ins and outs of where the physicality meet the theatre, the thrill versus the story, the physical versus the emotive impressions.

Through Alcina’s careful exploration of the main character the first rough run-through held a lot of loneliness and sadness. Impressions of how being surrounded by other people can sometimes make you feel more lonely then if you’re just on your own. Which led us to look for scenes of belonging, of happiness and celebration, to compliment without taking away from the atmosphere found. This led us to discuss friendships and belonging

s, what it is that drew us into circus and performance and what that world symbolises for us, and we used some of these conversations as inspiration for our celebratory and warmer finale choreography. As part of the rehearsal process we did several informal sharings where we invited friends and colleagues to see the material we had created so far and we also did a preview/premiere of the shows at the Crossing the Creek event at Laban Theatre and Greenwich Dance – who commissioned the show – in April.

Everything changes as soon as you put it in front of an audience and it helps me as a director to see it through other eyes (I normally watch the audience more than the performers at these occasions). Seeing the audiences reaction, hearing people’s feedback and get a little bit of distance to the rehearsal room gives a clearer view of what work is still needed or any structural changes to how the show hangs together.

From this we have decided on some dramatical changes and Bench is now getting ready to go off on a tour in it’s appropriate setting – around various outdoor theatre festivals around UK and Europe and of course coming to Greenwich and Docklands International Festival in London in June. I am very excited about allowing the show to take on it’s own life and paths, for me a show only really exists once audiences have had their chance to start to influence the shape of the performance and the energy of the performers and I am looking forward to see how it will be further influenced by the lovely audience at GDIF.

Last but not  least a big thank you to the great artistic team who helped to make Bench; guest choreographers Natasha Khamjani and Anna Llombart who brought some fresh and different flavours to our movement. Michalis Kokkoladis for designing a genuinely old and knackered looking Bench that in reality is super sturdy and can be flatpacked! Ted Barnes who as always have woven a stunning musical score for us, binding all the different paces and atmospheres together. Last but not least, designer Kasper Hansen and maker Sophie Bellin who sourced 20 costumes for the different characters that the performers are changing betwe 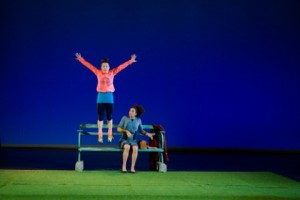 en through the show….