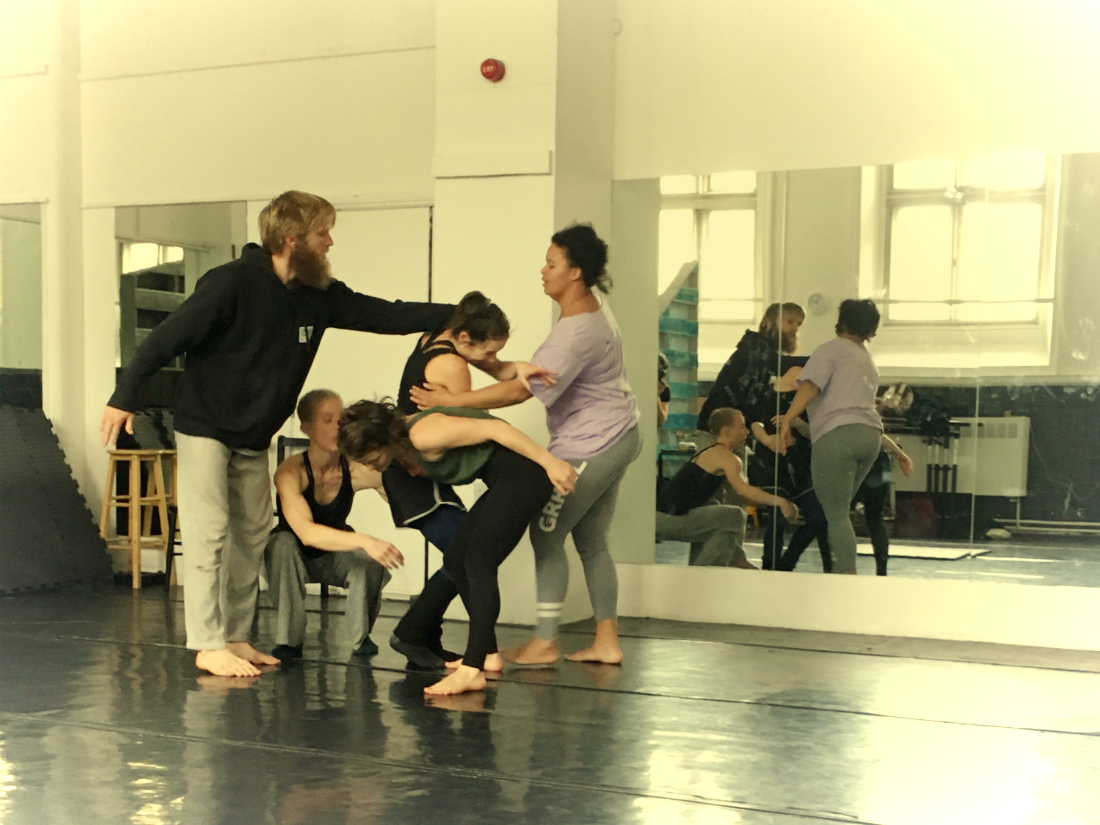 This week has been the last of our three week-long choreographic laboratories, and our third and final guest choreographer is Arthur Bernard Bazin from HURyCAN. We caught up with him in the rehearsal room for a chat.

How would you describe your practice?

We make a lot of movement, we are dancing. Some call it dancing, some call it physical theatre. We are really trying to find a relation between the action and what [the audience] are able to tell. There are things going on within the bodies especially, and we try and figure a kind of dramaturgy out of it. So there’s a lot of movement, trying to focus into a direction that makes sense, lets say. It’s a lot of contact in a practical way, a lot of contacting between the bodies, but also with the same body, dealing with the weight.

Everything! Starting with the language. It’s different when you try and communicate and it’s not the same language you use usually, the tongue. The body of course, we are human people but they are acrobats and we are dancers, and it changes the way you understand the weight. It’s probably the most important thing. How to deal with the balance. I think they take care of their balance in a different way, maybe more responsible, and we are not responsible. Of course we are, but trying to bring some instability, and Mimbre have something which is a lot more stable because of the work they are doing. So it makes nice questions of what I can propose. And of course it’s different people, there are a lot of aspects but fundamentally the capacity and potential we can bring out is different. They have a lot of capacity that we don’t have as dancers. So there is a lot [balances] that we could not do, but then there are others things I think they could do but don’t know that they are able to do them. It’s very nice because there is big potential.

What did you enjoy the most about the week?

London in the sunny weather?! What I was saying about the potential was very enjoyable. The sense that it is entering a different space with other capacities that we can match together. There is a common language which is clearly not settled, but developing. And we share a sensibility, where we want to go, which is maybe not the goal we want to reach, but we know that there is a way, a common direction, and so I enjoy being here very much because it’s very human this research.

What would you like to see the performers take into Lifted?

Actually, I don’t know what I would like to be there as it is now. I enjoy seeing that already in these few days, there is evolution, there are things happening that have good potential. That you can see that a few steps together make a sequence. It’s strong. Not maybe as it is, it is already strong like this but can grow still. I feel like there are a few moments that really could be in the piece as part of something. I can see it already, so I would like to see the development of this in the performance. One thing that is very important is that I can see how hard the girls are working, they’re starting to change their position – like the base, middle and flyer. Sometimes we try to invert and it’s starting to happen. I would really like – and I hope – that I will see some surprising moments with an inverted pyramid or something.