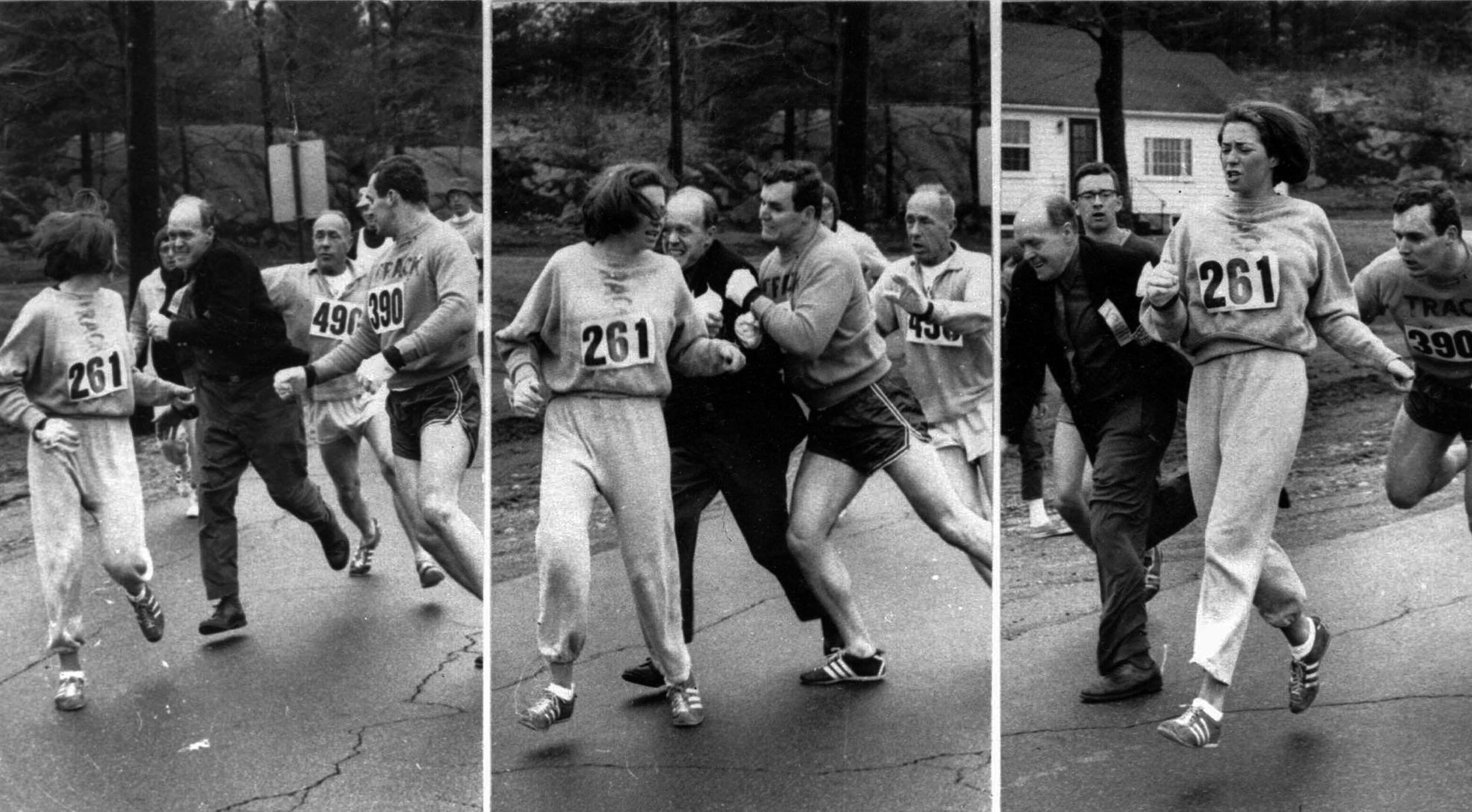 In 1967 Kathrine Switzer entered the Boston Marathon. Nothing particularly strange about that you might think, but at that point women weren’t allowed to enter it. Switzer managed to sneak past the officials by putting her name down with only her initials. Only a few miles into the race, a race official tried to physically pull her off the road; you can see the viciousness of his actions coming through even in the photographs in this video here at 1.16.

One of the things Switzer says that he shouted at her is “give me those numbers”. This is important. Switzer was the first woman to officially run the Boston Marathon; other women also ran it, at the same time and along the same course as the men, but without being official entrants with numbers.

Bobbi Gibb was actually the first woman to run the race in 1966. Unable to enter officially (the race director wrote back to tell her that women were not physiologically capable of running marathon distances) she took a bus for three and a half days across the country and ran it anyway.

After running in Boston, Switzer was involved with the fight to get the women’s marathon included in the Olympics, which happened in 1984. The lack of women competing in Olympic athletics up until very recently is really quite shocking. Women didn’t pole vault, run the steeplechase or throw the hammer all through my childhood, and there was also a weird hangover from when the longest distance women were allowed to run was 3,000 metres which meant that women’s distances went 1,500m, 3,000m then shot up to 10,000m whereas the men’s distances were much more sensibly spread out with 1,500m, 5,000m and 10,000m.

The even stranger thing about all this, is that a lot of women are very very good indeed at running, particularly long distances. Within the slightly obscure world of ultramarathons women occasionally win races outright.

So women were never bad at running marathons, society just assumed we couldn’t. Or possibly, society knew we could but thought it might be better for everyone if we never ever did. After all, we’re a lot easier to keep in our place when we don’t run away.

And of course you don’t need to be a world-beating ultrarunner, or a world changing marathon runner, to enjoy being outside and moving. I’m wildly unfit and tested the Boston Marathon’s theory about physiological capability of women to run marathons to its absolute limit in the London Marathon a little while back and still made it to the end. Campaigns like #thisgirlcan and Race for Life are showing that physical activity of any kind are for everyone.