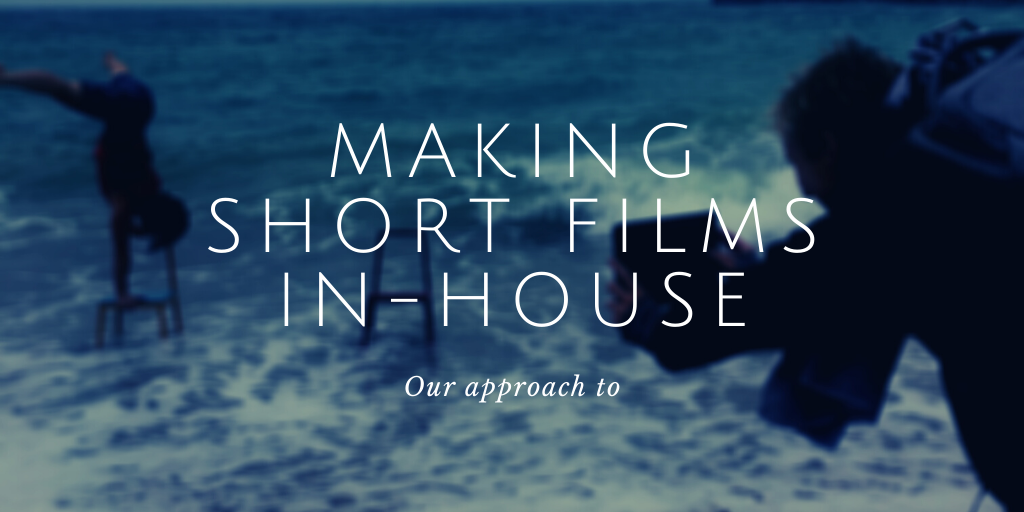 Posted at 11:17h in Our Approach To, Resources, Uncategorized by Mimbre 0 Comments
0 Likes
Share

In this instalment of Our Approach To articles, we invited Frankie-Rose Taylor, Mimbre’s former Marketing and Communications Officer, to share with us her experience of creating in-house short films as part of a project supported by The Space.

If there is one element of the complexities of social media algorithms that communications officers across the globe can deduce, it’s that video content  currently achieves significantly more engagement than anything else. But when you’re a small theatre company, working with limited time and budgets, it can feel unattainable to create such content regularly. Last year at Mimbre, we wanted to work out a way round this. To create video content cheaply and on-the-go, that helped us promote and celebrate our performances.

Why did we want to do it?

The performance Mimbre makes is extremely visual, and last year’s outdoor touring production Lifted was no exception. The story is completely told through the physical interactions between the performers, and with Mimbre’s trademark movement style. We wanted a way to capture the essence of this for our followers and potential audiences. Nothing can ever compete with seeing a Mimbre show live, but at least by using video rather than a still image, our audiences can get more of a feel of the production, as well as allowing more room for comedic potential and online engagement.

Additionally, we wanted a way to market our shows that allowed us to promote outdoor arts festivals as for the communities where they were based. Although outdoor arts succeeds in being far more accessible than traditional indoor theatre, through being in the public domain and often free, we worried that some outdoor arts events could sometimes appear to be more for outsiders, people willing to travel who are already fans of the form, than for local residents in the towns the festivals are based. We wondered if by creating videos where our acrobats engaged with the local area physically, and clearly placed the performances within those locations, we might promote a sense that outdoor festivals are for local communities too. Audiences love seeing themselves and their environments reflected on screen, and we wanted our videos to be as much about showcasing the town as the performers.

We were lucky enough to apply for and receive a Low Cost R&D fund through The Space. Our plan was to use the money to buy a tablet, and a subscription to editing software. We would then arrive at all our tour destinations a day early, where we would shoot and edit a short video of our performers in the town, to be sponsored across social media that evening. This would mean, not only would we have a host of interesting and diverse video content on our pages, but by sponsoring posts to local residents, we hoped to be able to reach more people from less traditional theatre audiences.

The Space were able to provide us with training in these areas. We wanted to film and edit on a tablet device, meaning we could create the videos quickly and on the move. Our first session was on video editing. Although we were taught Adobe Rush – a simplified video editing  software compatible with iPads, we ended up going for a Samsung tablet and using PowerDirector. Both apps require a subscription to be paid, but are intuitive and simple to use, while still allowing enough freedom to edit the videos to a sufficient extent. The training also taught us about different interesting ways to film sequences, as well as the best techniques to capture something as exciting as acrobatics on film. To help us to be able to film from a tablet, we additionally purchased a few accessories. My personal favourite was a steadymount – a frame with handles either side that secured the tablet in the middle. This meant I could attempt more elaborate shots, such as following the performers.

The filming itself was challenging but great fun. Once at the location of our performances, we filmed pyramids from Lifted in recognisable areas, as well as on the exact location of the performances themselves so audiences knew where to find us. We tried to keep an element of fun interaction with the space, and our performers were wonderful at suggesting ideas and in some cases volunteering to get pushed into the sea! The short time scale was at times stressful, as we wanted the videos to be edited and ready to be sponsored on social media before the evening peak, plus the traditional nemesis of outdoor theatre – British weather – was not always on our side!  But these restrictions often helped us to be more selective and creative with what we filmed, trying to get a diverse range of content in a short time.

Another challenge was editing all the amazing footage we had down in to a short social media clip. We decided on aiming for a length of 30 – 40 seconds, to try and ensure as many people watched through the whole clip as possible, receiving the full information about the performance. We wanted the clips to be square, for maximum impact when viewed on phones. We tried to keep a similar layout and style to each video we made, creating a sense of brand identity between them. One element of this was to make sure the town we were performing in was immediately recognisable in the first frame, by either standing by a train station, sign or landmark. We were also careful not to fall in to the trap of using too many different shots, making it look overwhelming and busy. Although it can be painful to lose good footage, sometimes less is more, and the footage can always be saved and used for something else at a later date.

The next stage was sponsoring the posts on our social media channels. The Space provided more training in this area, offering me new tips and tricks to construct audiences for sponsored posts on Facebook, Twitter and Instagram. We wanted to reach not just arts enthusiasts who would be likely to have already heard of the event, but other people from the local community of the festivals who might not traditionally attend theatrical performances. Although it is impossible to deduce the exact extent any social media activity had on event attendance, we achieved great traction from the posts, massively exceeding the targets we set with The Space. However, the blanket sponsoring to all residents of an area, rather than those with a pre-existing interest in the arts did result in a few unfortunate comments. On the whole however, the videos were well received and I hope created a sense of excitement about our performances.

What were the rewards

One of the most interesting things we found was that there was not much difference in interactions when we sponsored these in-house videos, to when we sponsored our professionally made show trailers and short films. The difference in quality was of course immediately obvious, but I wonder if the localisation of our videos helped to make these just as engaging? This was rewarding in that it gave us the confidence to keep experimenting with making short films past the end of the project, resulting in some very successful online content, as well as a wonderful archive of footage of Mimbre in rehearsal, training and performance. The amazing support and training we received from The Space was really rewarding, and meant the Joint Artistic Director of Mimbre, Lina Johansson, and I were able to develop new skills which helped us outside of the confines of the project. I was particularly grateful for the social media training and learning new ways to create audiences for sponsored posts. Overall, it was a really great experience to be able to create our own content, and capture the fun and excitement of Mimbre on tour.

It really helps with your engagement figures if your posts are being shared widely. Make sure you have created relationships in advance with pages and individuals ready and waiting to like and share when you go live. A lot of local news outlets and community pages are desperate for relatable content and happy to help, and you always have your performers, company friends and employees too.

It is very easy when on location with a group of talented performers to get over -excited and film huge amounts of footage. This however only leads to a more difficult editing process, with too much content to search through. I found the best way to avoid this was to go for a quick reccy (time allowing) before filming to choose a couple of suitable locations, and then create a storyboard to follow. This not only meant that filming was more efficient, but also sped up the editing process.

Even when you have planned your shoot, unexpected problems such as bad weather, building works or unhelpful passers-by can cause issues. It’s good to have a back-up plan, such as an alternative location to film in. Having good relationships with the venue or festival where we were performing in our case really helped, as they were sometimes able to offer space or local knowledge and contacts that made this easier.

You can watch more of the films Frankie made here.

We would like to thank The Space for making this project possible and for the many practical lessons they shared. And to thank Frankie-Rose for such a brilliant and useful explanation of the process. Check out how Frankie-Rose is now taking over Wales with her Production Company: CB4 Theatre.

Our Approach To, resources